You see it all the time on those medical shows on TV.
You see a doctor, who could probably earn millions modelling
on the side, running through hallways and corridors, hanging IV drips, getting patients
food, finding time to sit down and talk patients through all their fears and
concerns – basically doing anything and everything to help the patients through
all of their troubles.
I guess that’s what I’d expected would happen when I was told I had cancer.
My first week in hospital, however, would turn out to be a shock to my system. Even on the
day I was diagnosed, I saw my doctors for no more than thirty minutes. 30
minutes! And that would turn out to be the longest single session I’d see a doctor in
a day, outside of emergencies… well… ever.
In the end, it was the nurses who did the REAL work.
I’d been brought up, maybe through the media, maybe through cultural
perceptions – probably through ignorance – thinking that a nurse was just an
over-hyped house-maid.
As it turned out, it was a nurse who placed my first canula
in emergency. A nurse who took my bloods every morning. A nurse who’d be in
charge of injecting chemotherapy through my central line – a long plastic tube
that pumps medicines from the veins in your neck to your heart. Hell, it was a nurse who
put that in too!
If it wasn’t for their badges and uniforms, I wouldn’t have known the difference between them and the doctors.
In fact, I would’ve thought that they were the doctors.
Because the thing I found most astounding was that despite all their work on top of these vital responsibilites, despite taking care of, at times, half a ward-full of critical patients… despite their unreasonable shifts and rosters, they still managed to find the time to do all those I thought doctors would be doing.
Yeah, it was a doctor first gave me the bad news. Yeah, he was the one who prescribed all my medications. Yeah, he was the one whose knowledge and experience I could trust.
But it was a nurse who sat down and hugged me with my parents that day after I’d been told I had leukemia. A nurse who told me that my journey would be hard, but reminded me that I could survive nonetheless. A nurse who would sit down and just chat when I just couldn’t find it in me to sleep for the pain and worry.
And no matter how many cards we gave them in thanks, no matter how many chocolates or donuts we brought in – the true testament to their generous, giving souls, was the fact that they ALWAYS shared them with all the staff on duty.
Personally, for me, they’ve always been the balm that eased the sore of treatment. The girls and guys who’d go beyond their strict professional duty and hold my hand in emergencies, keep me calm during procedures and just keep me cheerful through their words and their, at times, crazy antics.
And if it wasn’t for them, I wouldn’t be the man I am today.
I remember the day I came back in for my second round of chemotherapy. My heart was racing, pulse rising from my usual 60 beats per minute to well over double that, and it stayed that way for most of the day.
I was back in that damn place, stuck in the tiny confines of that room for what would end up being fifty-six consecutive, bed-ridden days. And the crazy thing was, I didn’t even realise I was in trouble. I hadn’t felt apprehensive or anxious about all this… I’d unconsciously bottled it all up.
But then, as I walked around the corridors and glimpsed the door of my last room, I saw this. 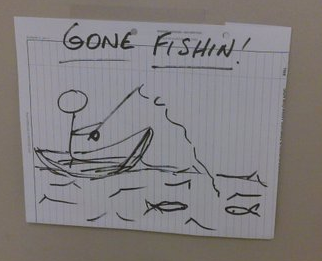 They’d known that I was a fishing tragic and that that was exactly what I’d be doing in my 2 week break. No matter how tiring, risky and stupid.
And, just realising that the next few weeks of pain and torture would be eased by these people, these amazing souls who made their job a profession dropped my heart rate back down to normal.
They’re angels, all of them. The humblest, most devoted, most under-appreciated, yet most vital aspect of hospital life. And in my eyes, they’re the lynchpin of our medical system.
So I hope after reading this, that next time a nurse tells you that you’ll have to wait another half-hour in emergency, you’ll understand it’s probably because there’s somebody who’s going through haemolytic shock due to
blood loss just behind that ED door. Next time a nurse insists that you leave a friend or family members bedside, after initially getting upset, you’ll see that it’s because if they didn’t, other patients’ rest may be in jeopardy. Next
time you’re about to berate a nurse for getting the bloods done a little late that morning, it’s probably because they had six other patients to medicate before they’d even gotten the chance to pull bloods out of a line.
And I hope that you’ll forgive them. If not for their compassion, dedication or graciousness, for the fact that you’d expect the same of them if you were the one on that bed.
Don’t worry – I know there are many roles in healthcare that
do just as amazing work – social workers, dieticians and the hospitality to give a few examples. I’ll be doing them justice in later posts, don’t worry about that.
As for doctors, I do believe they have to up their game in helping the people they care for beyond just their physical condition. Read more about that here
https://www.facebook.com/musingsofamedstudentpatient <– If you or a loved one needs help or if you enjoy my blogs or if you’re interested in medicine, like this page on facebook =]