But the truth is, this whole scare campaign really caught fire, after a literally fraudulent, made up paper, was published years ago. This video explains it well. Check it out.
Anti-vaccination movements have been around for a while, but this whole idea that vaccinations cause autism really started in 1998, after a paper was released looking at only 8 kids who’d ‘developed autism after having the measles vaccination’. But the fact was, that 8/12 of those kids had another disease at the time. Subjects were hired by an anti-vaccination group. Data was completely falsified – in fact NO children were found to even HAVE AUTISM in the study – yet alone 8/12. Since then. multiple studies, ranging from 5,000 to as many as 5 MILLION kids – have shown no association between the MMR (or any other) vaccine and autism. Hell – anti-vaxers even funded a $250,000 study to prove, once and for all, whether this was the case – and lo and behold… THEY FOUND THAT VACCINES DON’T CAUSE AUTISM!
The article was retracted by the journal that published it. 11/12 of the original authors have retracted their statement – something never seen in medical articles before. Only 1, the person who wrote the initial article, a person who makes millions off this campaign, a person who had his medical licence revoked prior to this article being written, still backs his claim.

At the time of publishing this paper, which has been confirmed to be fraudulent, Wakefield himself submitted a business prospectus for a new autism testing kit (of a strain of autism that he actually created) which would earn him $44 million A YEAR! He didn’t claim this conflict of interest, nor others that he had (including being paid £435,000 by lawyers to falsify the study – they were trying to win a lawsuit against vaccine companies and resorted to bribery, risking millions of lives in doing so) and now, he charges tens of thousands (some have claimed hundreds of thousands as he’s seen a resurgence in support, largely thanks to Trump’s anti-vaccine sentiments) in speaking fees.

Prior to that vaccinations were seen as a godsend. Probably because before that we actually had children dying in large numbers in front of us, unlike the thousands who die every year without having an organisation that makes MILLIONS in donations behind them, due to their kids, or other kids, NOT BEING VACCINATED. Anti-vaccination/Pro-Disease movements have actually been listed in the top 10 threats to humanity by the World Health Organisation.


The question comes to mind.
Why do people not know this information??
Well it’s either:

1) Anti-vax campaigns and groups, though they may have arisen from actual concern, are now powerful. They keep providing funding to enhance their agenda, making people think those who support them are doing good, when in truth they’re unknowingly being led by people who know this information to KILL thousands of dollars a year.
Now they, either by accident or, more likely, purposefully, have created a whole conspiracy theory around the idea that the government is trying to cover something up or make people sick on purpose. They invest millions into this and are making millions off it too… while 30,000 adults in America alone –  a developed nation – die of diseases that would never had affected them had they been vaccinated.

2) There is not enough conversation between scientists and ordinary people about why things are necessary and what different studies mean (or the studies don’t get publicised enough) because doctors/scientists don’t communicate well enough with the wider public and the public can’t get access of easy to process information.


Likely, it’s a combination of both.

The question now becomes:
How do we fix it?

Well, to stop the anti-vac campaigns, we need to raise awareness.
Make videos like this, blog posts like mine that expose these campaigns as the frauds they are go viral to the people who don’t know better and the people who question the necessity.

To do this, we need to EDUCATE PEOPLE on why vaccinations are necessary. What the REAL side effects and chances of those happening are. Research has shown that explaining to them the risks as opposed to trying to hide them, and conversing with people, with effective, respectful communication strategies, as opposed to making memes about them or calling them idiots is more effective.
And we have to communicate this information to the public, with as little jargon as possible, at levels that ANYONE WHO CAN READ CAN UNDERSTAND.
Interestingly, evidence also shows that trying to persuade people is less effective than reminders for people to vaccinate.

Vaccinations are why we, in the developed world, don’t have to worry about diseases like polio, smallpox and measles. 2 of those 3 still plague the developing world, by the way, and kill MILLIONS of people, a lot of them kids, every year.
To make sure they’re effective, a certain percentage of the entire population needs to be vaccinated. This level, which we call “herd immunity” will ensure that the population can’t spread the disease that’s being vaccinated against easily. The number varies among different diseases depending on how easily it spreads and other factors, but for the flu vaccine in Australia this year, that number was 95%.


And if you’re skeptical about the effectiveness of these programs, a few of these stats should indicate how important they are.

Reduction in vaccine preventable diseases after 5 years of vaccination in Croatia:
Bernard Keich, “Impact of Vaccination on Vaccine Preventable Disease in Croatia”, Periodicum Biologorum Vol 114, No 2, 141 – 147


So they are necessary. And you can see from that video and my data above, they DON’T cause autism, like some groups would have you believe.
They do have side effects in some patients (less than 1%), but most of them are minor, and they save more than they harm.


Without them, we’d still have millions of people, most of them KIDS dying every year.
Millions of kids die every year in the developing world from diseases that could have been vaccinated against.
We are privileged to not have our kids torn away from us. 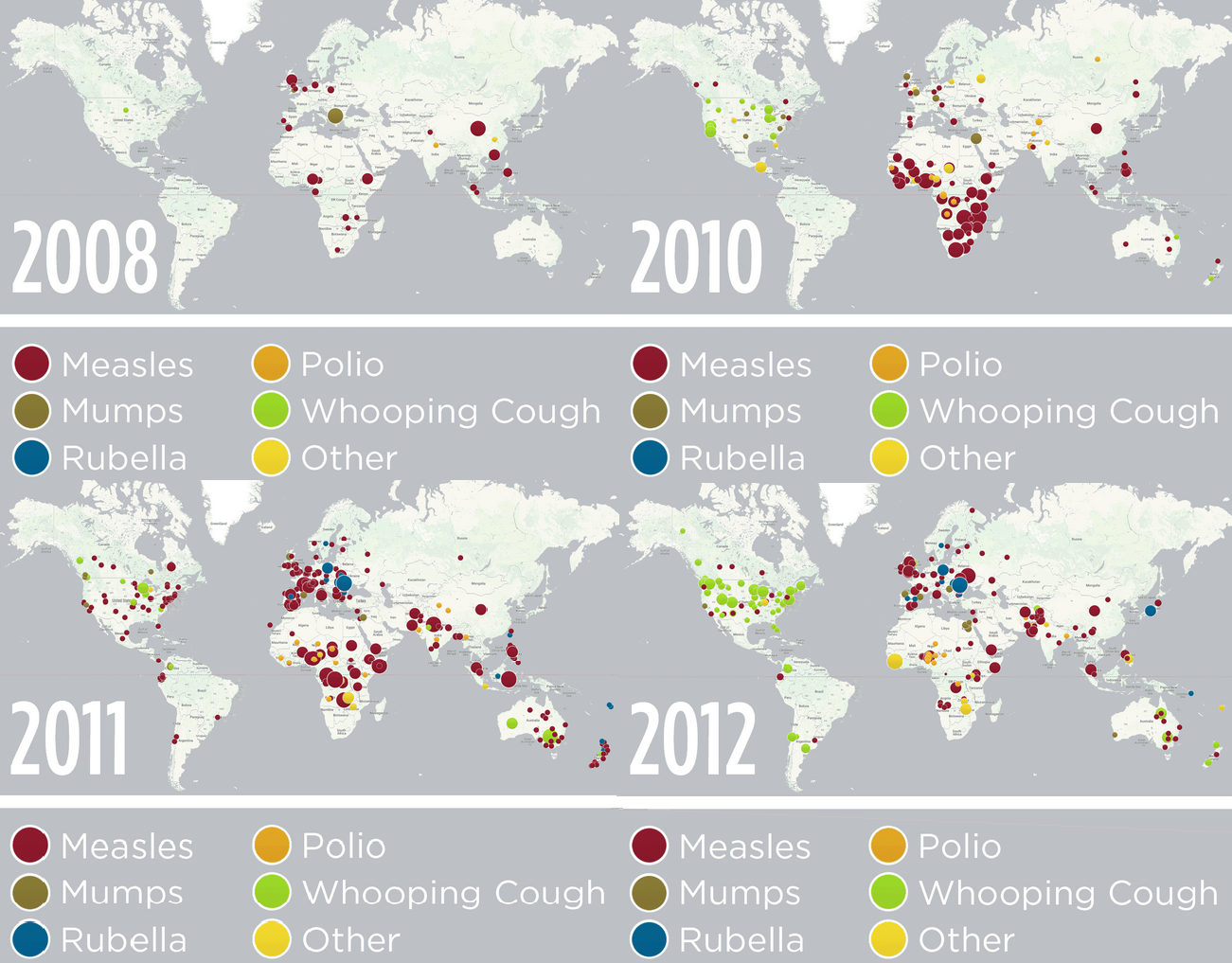 But this may soon be changing… with incidences occuring more and more in developed countries due to the influences of the Anti-Vac movement.
You and I can stop this trend where it stands.
If We Vaccinate Our Kids.


You can do your part by sharing that video, or this blog post with those less aware than you so that you can save your kids’ lives, as well as THEIR KIDS’ LIVES.

An addition to the original post – A guide to educating those who think vaccinating isn’t safe:
One question to pose to all anti-vaccers next time you debate them – what’s the harm of vaccinating? The only evidence of it having some conceivable harm was the fraudulent Wakefield studies shown above. No heavy metals are added to vaccines any more by law, indeed, they never exceeded the amount you get in a serve of tuna. Risks of things like Gullian Baree Syndrome are 3/1,000,000. For the Flu vaccine, these rates are 1/1,000,000. The Flu itself has a 17/1,000,000 risk of causing GBS!. Risks of febrile seizure are present, at 30/100,000 children vaccinated, but they cause no long term harm. Indeed, reducing incidence of severe diseases like measels, or the flu, which cause febrile seizures at much higher rates than vaccines ever could, actually leads to LESS overall febrile seizures from occurring than vaccinating.
Common Arguments They Make. Why they’re wrong:
They often argue “It’s good to have some diseases early in life!” – well vaccines work on that same principle.
Except instead of giving you one that can leave you sterile, brain damaged or dead, it gives you a weaker/dead version of the disease so that your immune system is prepped for later encounters with disease. This video outlines the immune processes that occur in vaccination and the dangers of not vaccinating really effectively!
“They don’t work in all people! Why should I get mine?”
That’s true – they don’t always cause the intended effect, and vaccinated people can still get sick. However, if enough people in a population are vaccinated (and evenly so – as in, there aren’t pockets where people have very low vaccination rates where diseases can spread) the disease can’t spread in the first place, so everyone’s gotta do it for it to be effective. Many people (pregnant ladies and immunocompromised people for eg) can’t get them – so you’re protecting not only yourself and your kids, but also them. That’s the concept of herd immunity!

“But what about the toxins and insets on vaccinations which outline worst case scenarios and the vaccination court? Doesn’t that PROVE vaccines do cause harm?”

In preparing vaccinations to ensure they’re safe, some chemicals are added to some vaccines. The most common ones espoused by anti-vaxers are things like formaldehyde and mercury. However, you get 10-60x more formaldehyde when eating an apple as compared to the traces of formaldehyde left in vaccines after their preparation. Similarly, the use of thimerosal has also been criticized, but most modern vaccines no longer have ANY mercury or mercury derivatives (indeed, many of these mercury derivatives are passe through via stool as well) – and you get a higher dose of mercury in an 85g serve of tinned tuna than you do from any vaccine too.

“But can’t vaccination make me sick?”

Most vaccines out in the market are inactivated ones. The flu vaccine is the most famous, common example. Viruses are killed and there is literally no way that they can cause you to catch the disease. Live vaccines are out there too. But they utilise a severely weakened version of the pathogen they’re immunising for, or even, in some cases, use similar viruses or pathogens which are nowhere near as dangerous as the actual vaccine, but confer good rates of protection nontheless.

I understand. You’re concerned. But hopefully I shown you why vaccinating is so crucial. Do let me know if you are still concerned – you can reach me at info [a.t.] nikhilautar.com