It’d been literally half a year since I’d seen this group of friends – my med student buddies – and I had to do the rounds. This question came up a lot. And almost always, it was about my health.

“So yeah I’m actually good!” I’d always start, smiling and gesturing wildly so as not to worry anyone. “In fact, my cancer’s at a point now where it can’t come back!” And to this, I’d get an emphatic ‘Congratulations!’, a shout of yipee and a toast and the occasional pat on the back (*wince* – I have some healing wounds there that aren’t getting better fast…).

“But yeah otherwise, treatment for the graft versus host disease continues. And I mean though the skin is slowly getting better, the major thing left is the cramping, which can suck.” The faces become more sallow as I say this. “But hey, they’re getting better too!” I lied, and again they’d celebrate, albeit slightly less enthusiastically.

Hey! What could I tell them? How could I explain to them the truth of how it affects every single aspect of my life. Even in this crowd of young, caring people, there was no easy way of really telling them what it really meant…

I don’t think people really know how much this can affect me…
Me getting up for the 10th time or something some night. Mum filmed it ’cause they kept me from sleeping for so long, we thought we may have to show it to the doctors ASAP.

And after a while… explaining it over and over again takes too much effort. Hence this post.


I guess you could argue that it’s hard to really talk about anything over the insane amounts of decibels that blast through a nightclub’s speaker. I guess you could say that lambasting about the constant frustration and the looming anxiety of something you can’t control for half an hour would break the social convention of small talk. But in truth, now that I think about, there really isn’t an easy way to explain how it really impacts your mindset, a chronic condition.

Because unlike what most think, that frustration, that anxiety, the physical effects of a chronic illness – that’s only half the impact. Chronic diseases, mental illnesses, even things like stress affect our very mindset, they play a factor in every tiny decision we make and it was only after reading this amazing article/blog post that I feel I’m properly able to explain that now. 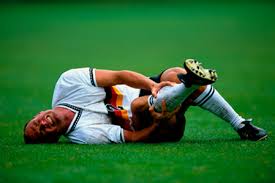 It’s only half the pain… but that pain can be significant.

It’s called the spoon theory, and the concept is brilliant and encapsulates everything there is about having such an illness.


Picture yourself having to walk around all day with 12, and only 12, spoons. Each little action you take – you get one confiscated. I know it’s in-feasible to have someone follow you around all day, and I know that handing one in may be conceived to be another action that requires another spoon that ends up in an infinite loop leaving you with no spoons, and that there may be all kinds of other particulars that may make this nonfunctional… Hey, I said it was a great analogy. Not a perfect one.

I digress. Now… where were we?

Waking up and hopping out of bed? That’ll be one spoon.


Finding the will to get up and brush your teeth. One more.


Doing other… business… in the bathroom and then showering. Another one.


Putting on your clothes, eating breakfast and going out for the day’s business. 2 more please.


You may think I’m exaggerating, but that’s life for so many people. People with cystic fibrosis, people with heart failure or latent blood cancers, people with horrible cramps like me will find some, most, even all of those tasks tiring. Right now, I’m scared of even getting up from a seated/lying position after 5pm, in fear of my whole body having EVERY SINGLE muscle contract at once (from my legs to my abs, to even my neck), leaving me dazed and staggering, doubly terrifying if I’m trying to get up steps (I’ve fallen twice already, which may have caused soft tissue damage in my knee) – even gasping wildly for breath (getting up and staggering to the car was what took me in to hospital the night before I found out I had another tumour growing on my rib). 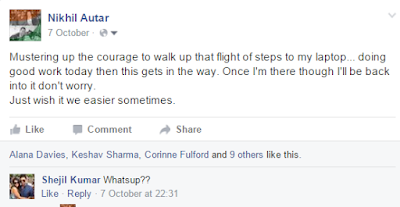 Me a few weeks ago. Facebook usually isn’t somewhere you post your down moments. The image of themselves as successful, happy people that people like to portray, combined with life highlights usually drowns out moments or cries out to nobody like these. I guess I’m lucky to have some friends who saw and cared to ask.

People going through severe depression find getting out of bed to be impossible. It’s too painstakingly hard to face the day or the world for some, too lonely for others – it’s unsurprising that it makes no sense to many – and leaving that first confine costs them significantly more than 1 spoon.

Now imagine
the feeling of having to give that spoon up. Each. And. Every. Task. You. Do. And imagine having to
account for and plan out everything around not only your medications and appointments over the days/weeks/months to come, but also for how many “spoons” you have
left. Yes… sometimes you can have a “feel” for things and plan accordingly… But remember, often your condition can be unpredictable… leaving you caught with even less.

And imagine having to pass up on doing things that are good for your career, good for you, or the things you love because you simply don’t have, or can’t afford the energy to do so.

So, where were we? Ahh that’s right… The rest of the day.

So when you get through the day’s work or study, with travel, dealing with setbacks, explaining things like this to people and – could you imagine – kids… you’re left staggering around with 1 spoon.  If you’re lucky.

And if you’re lucky enough to have the will, or else prop yourself up by speaking motivational nothings to yourself (or by taking heavy amounts of Beroccas or even stronger stuff) and manage to head out the door to “enjoy” yourself as I did that night, you’ll pay for it by having a semi (if that) rewarding night and by being forced to watch on jealously as “normal” people enjoy things like dancing, drinking and eating (don’t forget, the physical restrictions ALWAYS stay with us) and even walking without a worry. And if you wear yourself out too much – you’ll pay by having a few less spoons to use the next day. That’s if you haven’t worn yourself out already before you’ve even had the choice to go and have fun.

Because yes – you DO pay if you go over the limit. Harshly.

And no… you don’t get a break from it.
Ever.

For some… especially those who are poor (it’s hard to get extra qualifications or backing for your business, or even a job in the first place with this on your record) this can become a cycle that just continues on and on.

This thing looms over you, and drains you, in all ways, forever. And I may complain about it – I, hell, anyone with any such draining condition (no matter how “petty” or “whiny” it may seem) have the right to do so no matter what – but there are so many people who have it worse.


I have the benefit of having a year off from studies, so I can, when I’m well enough, accomplish other things despite this. I also have a family, all amazing people, who care for me and do everything – from fixing me meals and taking me to appointments, to dragging me to my bed (which actually happened after that party 2 nights ago as my muscles were drained from enjoying myself and dancing for a few minutes) when I need them to. I’m still young and can look forward to a potential future without this. So many people DON’T have that luxury.


Imagine being blind and having to rely on that carer, or services that may, or may not exist, all the time. Imagine having inflammatory bowel disease or some form of incontinence that means you have to rush to the bathroom (which you always have to be aware of, not just because of the embarrassment this could cause, but actually be aware of if they‘re close) at any second of the day. Imagine being a carer for someone with that illness and having to not only watch on helplessly as your loved ones struggle to juggle their spoons, but have to take on their spoons yourself – as you work 2 or 3 jobs to cover the bills, or give up YOUR happiness to do so… as my brother often has to.


Imagine having had this your whole life, and knowing that this may well take your life, as people with cystic fibrosis and other chronic, right-now-deemed-terminal illnesses do.

But as the lady who invented this spoon theory said in her original post… this can also be seen as “a blessing. I have been forced to think about everything I do. Do you know how many spoons people waste everyday? I don’t have room for wasted time, or wasted “spoons”. And if you’re lucky enough to have a friend or family member or patient who does have such an illness… if they’re with you… remember that they “chose to spend this time with YOU.”

I hope this gives you a glimpse of life as a chronic patient.

I hope this allows you to forgive “misgrievances” anyone with an illness may have committed – whether it be them having to bail at the last moment on a meeting, skipping or else refusing to take medications because they honestly forgot or are sick of taking them, or them just simply pouring their heart out and letting people know what it feels… I’ve seen so many people cry things like “Bullshit!” and “Pussy!” when people “whine” about things like this.

Remember – these things take a huge emotional toll too (my experiences with it. And how I deal with that).  It’s not easy hearing “you look good”, or “you look better” when you feel like the complete opposite. It’s not easy having to explain everything, often lying about your health just to make others happy too. The frustration of this thing never leaves you too…


And finally, I hope this let’s you understand those people in your lives who do have extra issues always looming over them. And I hope this urges you to go and ask them if they’re OK, and equips you to maybe help them.


Because who knows. Someone you love, or someone you care or are caring for may need your help.