Last post:                                     My Story:                                         Next One
Recently, I was given some pretty bad news. I’ve got bronchiolitis obliterans, a lung manifesation of the graft versus host disease that plagues me after my bone marrow transplant. Essentially, it’s my donor’s immune system (in bone marrow transplants, you inherit the blood making cells of your donor, which includes their white blood cells) attacking me. This time though, in the lungs. Over time, it’s something I’ll have to watch very carefully, as the survival outcomes for this aren’t that great, and it’s something that progresses too.As you’d expect with anything of this nature, I was scared. Anxious, without even knowing it. Exams were going on too when I got the news, so I didn’t even get time to properly take it in, yet alone look it up. When I did, I realised how bad it could very well get for me. And I got even more scared.A range of emotions go through you when you hear bad news. You’d think I’d be good at dealing with these things now, given how I’d dealt with my cancer, and then my relapse and then a third cancer, and everything else (and there have been a lot of other things too) on the way. But though that attitude I took on board after all those things does help in the long run, it’s almost impossible to make some good come out of this when it just hits you. Experience isn’t exactly much help with these things.

But as these things happen time and time again for me, what seems to hit, and stay with me most, and longest, is a sense of finality.

Dealing with the leukaemia was the easy part, I feel often when I look back. The chronic effects of this all, combined with the frustration and grief (loss is loss; grief needn’t be associated with death) it brings about, makes me prone to feeling this way.

So I had this crazy notion a few weeks ago. What if this was the thing that brings me down? What if one of my hundreds of other conditions caused something like this too? Who knows how long I had left?

So why not live out my dreams?

For those who don’t know, I play poker. I started about a year and a half ago, when the cramps I get, that nowadays leave me debilitated and in pain most nights, started progressing. I needed something to do. Something to get my mind off things. So I started playing this game I learned years ago, something I’d played just for fun and in passing, at our local club. I was gonna cramp sitting at home anyway. Why not play poker while I got them?

And slowly, but surely, I got better at it. I started playing buy-in, tournament events (I’d played for free for the better part of a year,  and win some money in the process). Nothing huge. In fact, til just a few weeks ago, the highest buy-in I’d posted was a $25 one. Most games I played were either free, or under $15. And til just a few weeks ago, I’d won over $6000, from less than $1200 in buy-ins! $2050 of that went to charity – as a reader of the blog had insisted on donating something to me, and that it be used for ME to have fun. That act stays with me til this day. The reason she wanted me to spend it on me just hit the nail on the head in terms what I was feeling at the time. But I couldn’t just take someone’s money in good faith. So I decided to donate all the winnings from her donation to charity instead! You can follow that journey here!


I knew I was gonna play it at some point in my life. But after hearing the bad news a few weeks ago, I desperately wanted to do it this year. Even after the inital fear and that feeling of doom dropped away, I knew that life could turn at any moment, especially in someone like me. Who knows if I’d even be healthy enough to play the gruelling, 7 day tournament next year??


Yet I was still afraid. The buy in for this was $10,000! I’d be playing some of the best players in the world! People who played this for a living! I knew I was good. But was I that good? What would my parents, what would everyone around me think? Was it really worth spending a good chunk of my savings on this???


In the end though… this happened. 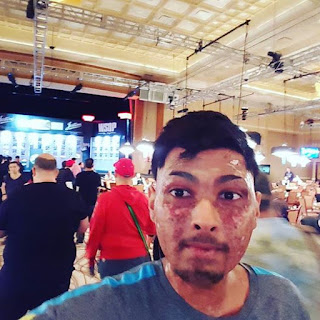 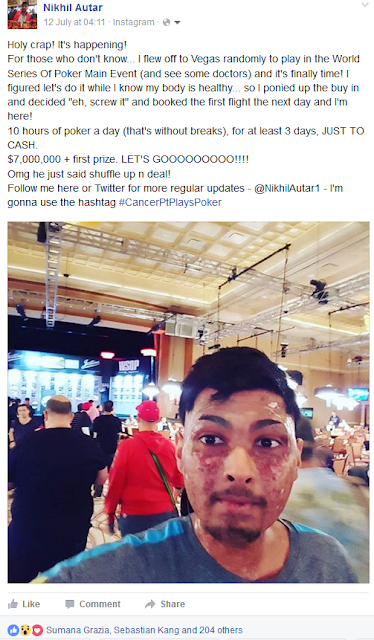 Yep. I did it. I booked the next flight out, for me and my brother, and the next day, we were there.
And the result?
This. 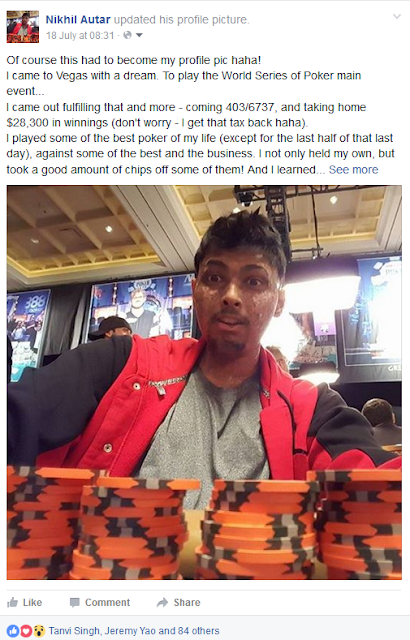 I did it. I’d studied my butt off (because contrary to most peoples’ perceptions, poker is a game of incredibly complex strategy, math and risk stratification), read all my stuff and played the most focused, quality poker I’ve ever played, for 10 hours a day, for just under 40 hours and not only made a healthy profit, but beat out thousands of poker professionals (including some of my heroes – who I got to play against too!) to get there!
It was the best couple of weeks I had in my life! All because I made this decision on a whim.
I think Jim Carey encapsulates every lesson you could take away from this in one minute.

\
So. What am I gonna do with the winnings?

But that’s still HUGE for me!

10% of the money goes to my brother. He’s long been suffering alongside me. Indeed, more than me, I’d say. It’s not easy going through cancer… but I reckon it’s MUCH tougher watching someone you love have to go through something like that, while not being able to do anything. He’s suffered not just the emotional and physical burden of looking after me, but also given up much of his life, just so I may have a semblance of a normal one. I can never thank him enough for that. But I can definitely try!

Around 10% will be going to my cousin, whose family took me in for a couple of months, and treats me as their own, til this day,  and my father, who’s turning 50 this year.

And 10% will be going to charity. I’m an effective altruist, and don’t just believe, but KNOW that the best way we can make a difference in our lives is to give to the organisations that change the most lives per dollar spent. A great website actually does the research for you and ranks these charities for you. Which of these top charities am I giving to then?

A great summary of Effective Altruism – a way of giving that makes sense!

In a way, all of them. Because, also something you may not know, recently, I started up a social enterprise – a charity that works as a business and distributes all profits to charities – called PlayWell! It’s been slow work, but as soon as I’m a little more healthy, I can dedicate more to it. And it’s well worth it. Because this thing could change the world.

Imagine being able to make those hundreds of thousands of hours you‘ll spend in your lifetime on entertainment achieve good. Well, on PlayWell, you can. Through many direct and indirect ways, your every action on this entertainment app will allow you to make the hours you’d be spending on Facebook, or YouTube, or Tumblr or Instagram – the things you’d be doing anyway – make money for charity! Every tiny action of yours will generate revenue for charity! All while you enjoy watching stuff from your favourite stars, supporting them, and discovering the best content on the internet! If you know an internet star/a budding one – let them know they’re invited to join now! Hopefully, it’ll be a thing – sooner, rather than later, and help charities make money in a completely different, currently untapped, way!

If you know anyone who’s a budding/current online star, who wants to make more money while helping the world, tell them to sign up at www.playwel.org!

And the rest of the money? Well… that’ll be put to letting me play Next Year too! And in bigger tournaments for the year to come! At least 10% of all my poker winnings from this day forwards will be going to charity. And I’ve proven to myself that I can play with the best of them. I’m sure now that this is an investment that will pay off.


While I was in America, I also visited some amazing doctors. And it’s not too bad news for me overall, and the lungs! A doctor who I get second opinions from routinely saw me in person for the first time, and said I looked much better in real life than on paper – which was great for my prognosis with this disease. The lungs are still iffy, all agree, but it’s not progressing, and indeed, may not progress in the near future, if I convince my doctors to get me on some drugs I’ve been telling them to put me on for months now... If you sense frustration there, you’re right. One of my doctors described the care I’d been receieving from my recent doctor as “neglect”… And though there’s one little issue left that may be concerning, overall, it’s still great news!

And most importantly, I feel good! This trip has done so much for me. No matter how much I tell myself I can still do a lot – something that’s kept me going despite the frustration this disease brings – I still occasionally get brought down. Now, I’ll have at least one week that can remind me that I definitely can. Hopefully, that will help me continue to try and do as much for this world as possible.